How TULA Harnessed the Power of Influencer Marketing to Become 2021’s No. 1 Skincare Brand 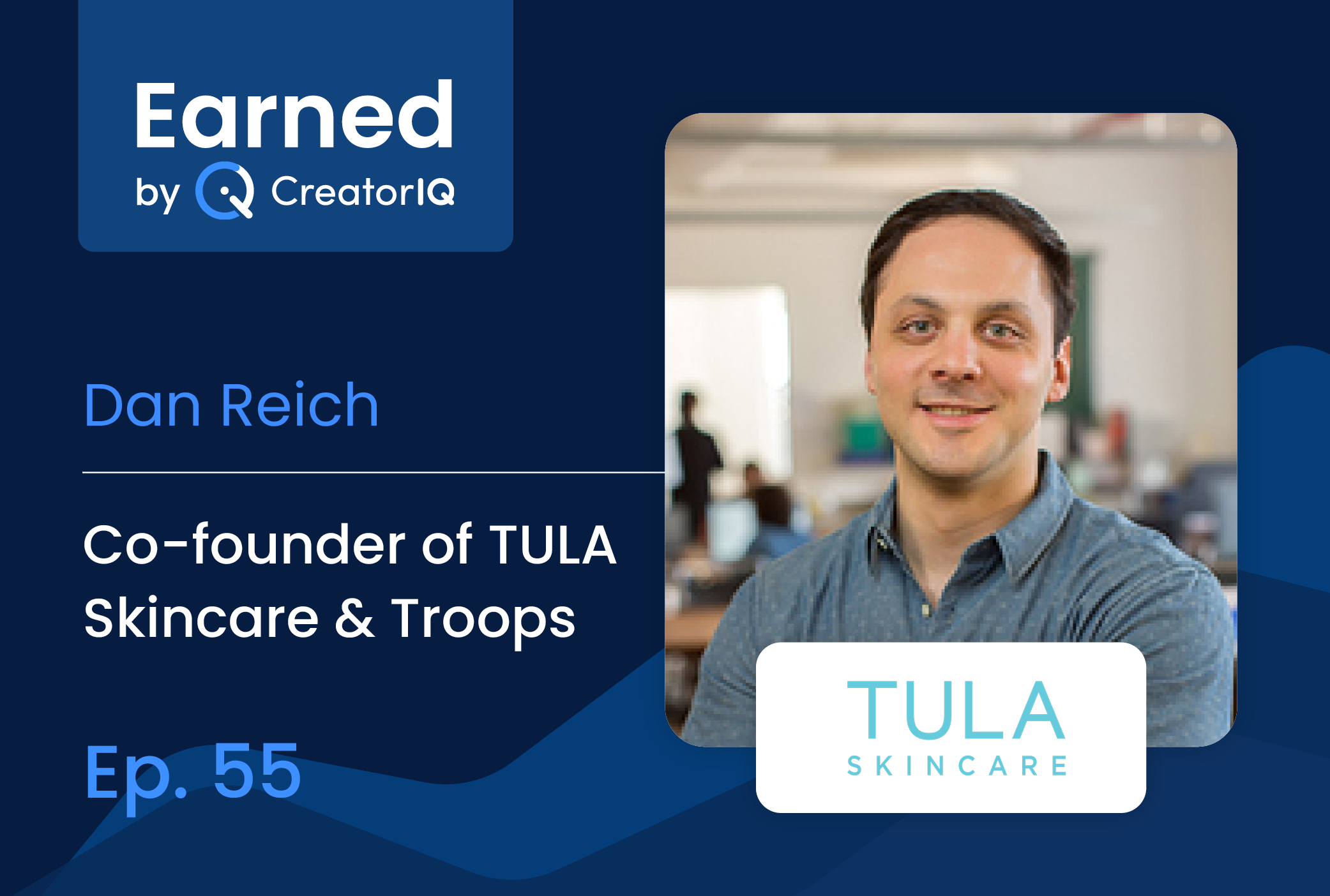 In Ep. 55 of Earned, we sit down with Dan Reich—entrepreneur, investor, and co-founder of one of today’s hottest skincare brands, TULA. The probiotic-powered line, which was acquired by P&G in January 2022, achieved $106.1M EMV in 2021, ranking as the year’s No. 1 EMV-driving skincare brand.

We start the episode by diving into Dan’s entrepreneurial trajectory, beginning with his first company in high school, to co-founding software companies Spinback and Troops, both of which were acquired by Salesforce, to launching TULA with Ken Landis and Dr. Roshini Raj. We learn why Dan decided to hire an outside CEO for TULA, and what made both Julia Straus (now the CEO of Sweaty Betty) and current leader Savannah Sachs the best fits for the role. Dan then shares the rationale behind TULA’s influencer marketing philosophies and approach, explaining why the brand looked beyond the traditional beauty influencer to drive momentum. We unpack the differences between the influencer relationships that worked well for TULA versus those that didn’t, and Dan emphasizes the importance of building long-lasting, mutually beneficial partnerships. To close the show, we discuss the evolution of the social media landscape, and Dan reiterates why word-of-mouth marketing, a tactic as old as time, is only going to continue to accelerate.

We’ve included a couple of highlights from the episode below, but be sure to check out the full video above, or tune into the podcast on Spotify, Apple Podcasts, or Google Podcasts!

“Influencer Marketing has contributed to 50% of sales at TULA”: Dan Reich on Why Creators Were Part of TULA’s Identity Since Day One

Conor Begley: TULA was the number one skincare brand we tracked by EMV in 2021—so the best performing brand in the whole category. What are some of the principles behind influencer marketing that you implemented that you think drove that success?

Dan Reich: If you think about word-of-mouth marketing, this is the marketing tactic that is as old as time, or as old as the caveman. The caveman invents the wheel and he comes out of the cave screaming, “Hey everybody, look at my wheel.” There weren't paid ads, there weren't billboards. None that existed. Marketing was—and still is—storytelling and conversations.

When you think about advertising and marketing in general, the things that we talk about the most are the things that are worthy of conversation. And I saw this at Spinback, in fact on QVC. I remember one day I saw this huge spike in sales in our dashboard, and in particular at QVC. I thought our product broke. In fact, the whole team was scrambling because we thought we were having this big failure. And when I dug into it, it turns out nothing was broken, we just saw this huge spike in sales from a blogger on one of these very, very, old school forums at the very bottom of some product page on QVC. And I was like, wow, this is really powerful. This was what we would call today a micro-influencer for QVC. This person was engaged in real, authentic conversations, and meaningfully drove sales.

When I saw that, I just remember thinking, this is that caveman story, just happening digitally, and that's probably going to accelerate. It just seemed to me like we hadn't even begun to scratch the surface. Facebook was in super early stages, they had gone through multiple iterations of their product and their platform and their monetization strategy. But no matter what phase they would go through, to me what would always be true is that idea of influencer marketing, word-of-mouth marketing, and it was probably going to accelerate—just the mediums would change. And we actually see that today with Facebook to TikTok now, for example.

So at TULA, the thinking was how can we harness the power of that word-of-mouth marketing that we saw at Spinback across these brands, but really make it core to TULA from day one. How do we institutionalize that? At the time, I think a lot of brands were thinking about influencers as another person that the PR person had to have a relationship with. They’d have their list of publications and the editors and writers at those publications, and then maybe a short list of influencers. But for me, it was a new retail channel. It was a new performance marketing channel. These would be the people that would fuel the brand and create that buzz. So I wanted to do a lot of that as quickly and as aggressively as possible. I wanted to treat influencers like a sales funnel and a performance marketing channel. So, in the first days of TULA, we did that. We had funnel metrics, we had tracking against every stage of the outreach to conversion to relationship, and we just carried that forward throughout the history of the organization. And as time went on, we just got a little bit better and a little bit better and a little bit better.

And if we fast forward today at TULA—and [Savannah Sachs and Julia Straus] have done a great job talking about this publicly—that has contributed to probably 50% plus of sales at TULA. And why that's important is, in today's world, a lot of brands think that if they go DTC and if they launch a Shopify channel, because it's direct, it's much more cost effective and cheaper. There's no middleman, there's no retailer. But that's not true. There absolutely is a middleman, because while the distribution is free, you are certainly paying a lot more for the eyeballs and attention on Facebook and on Instagram. And so there's that balance and calibration that has to happen that a lot of brands don't really get right. And then they wonder why their customer acquisition costs don't make sense, their lifetime values don't make sense, and so on and so forth. But in short, that earned media concept that you guys are so good at tracking, to us was always mission critical, and part of the brand identity and how we built the brand from day one.

You can watch the entire interview here, or listen to the full episode on Spotify, Apple Podcasts, or Google Podcasts. To catch up on our other 54 episodes, featuring leaders from brands like Milk Makeup, Gymshark, Gucci, and Summer Fridays, visit our Earned Podcast page.

In Episode 21 of Earned, Conor chats with Sasha Plavsic, founder of clean beauty brand ILIA Beauty, which achieved a jaw-dropping...

Earned Ep. 26: Marianna Hewitt on Why Being an Influencer Was the “Greatest Preparation” for Launching Summer Fridays

In Episode 26 of Earned, we chat with the one and only Marianna Hewitt, powerhouse influencer, host of the Life with Marianna...