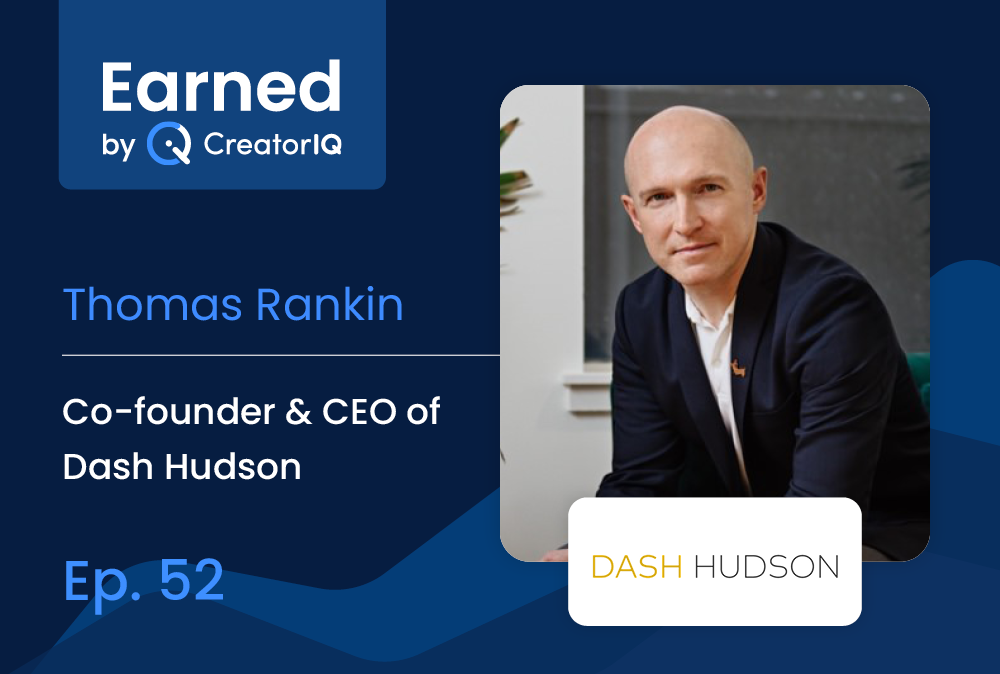 In Ep. 52 of Earned, Conor sits down with fellow B2B social media marketing software leader Thomas Rankin, co-founder and CEO of Dash Hudson. To start the episode, Thomas explains how Dash Hudson puts creative at the center of everything they do, as well as how the brand helps its clients understand which creative will perform well and deepen consumer relationships. Thomas reveals that Dash Hudson was originally created to be a consumer shopping app, then shares why the company ultimately pivoted its focus, along with the key learnings that contributed to its success today. We learn how Thomas determined Dash Hudson’s ICP, and hear how he “hustled” to cut through the noise and acquire the company’s first set of customers. Switching gears, Thomas details the winning creative strategies that today’s top brands are using to produce impactful owned media across their channels. To close the show, we talk about TikTok, and Thomas previews the innovative features that Dash Hudson is rolling out to help brands optimize their performance on the platform.

“They really care about communicating creatively and entertaining their audience”: Thomas Rankin on What Separates Winning Brands’ Owned Media Strategies

Conor Begley: What have you noticed about the Revolves of the world, and other brands that has been a consistent signal for success? What are they doing differently when it comes to owned social or creative that is winning?

Thomas Rankin: So it's really interesting, and we see it across both very large global brands and more modern DTC e-commerce brands. Whether it's Nike with Jumpman or it's Hydro, the thing that ties those companies together is that they really care about communicating creatively and visually and entertaining their audience. The brand and the relationship with the customer is just core to what they do, and they hold that very sacred.

But they're also innovators and data-driven;  they want to set their teams up for success so that they have the insights to ensure that brand creative is as impactful as it possibly can be. The brands that we find are most successful in this new world of “social entertainment” are those that one, understand it from a creative perspective—they want to communicate with their consumer through those mediums—and two, they’re resourcing it. They're either building specific teams to work on this type of creative, or they're retaining an agency to help them with that—the best ones do it in house, not with agencies. And then three: they're using data to make decisions, whether it's us, or you guys, or some other platform. Everything is really data-driven.

And then from a senior executive point of view, typically the CMO or the VP of marketing, they're willing to take risks. And I think the brands that are being most successful in this world of modern social marketing typically have a CMO or a VP that's going to resource their teams and enable them to take risks and trust them to figure it out, because with new channels, what you put into it typically is what you're going to get out of it. And that evolves over time. Not every brand continually evolves with the changing times of social media, but the best ones continue to invest.

Conor Begley: For people that are just starting their companies, you typically have two problems, right? Either, how do I build a product that people are going to actually like to use, or how do I actually get them to pay attention to me? Because there's so much noise; there's so much out there that is trying to attract people's attention. It turns out we're not the only B2B software companies trying to sell to marketers. So how did you get your first 25-50 customers? What did that process look like? What tools or methods did you find worked really well?

Thomas Rankin: So I love telling some of these stories to my team now because it's not like you're trying to say “oh back in the day,” but it's more like, “this is how hard it is to get customers.” To be honest, I'd built some relationships with brands while we were doing the shopping app, so I at least had people to talk to about what we were building and I could get their feedback on it. So while I wasn't necessarily trying to sell it to them, I had real potential customers who could give me that feedback. But one of the first things that we did was we built lists. We created a list of all the brands that we felt were our ICP at the time, and we outsourced it to oDesk. We had somebody come in and set us up with HubSpot as a CRM. And then there were three of us, and we just started doing outbound, right? Outbound email campaigns all day, every day, starting in the middle of August 2015. And I'd say by the first week of September, we started to get responses back and started to have conversations.

And there was just this really rapid learning process that we went through as we started to fine tune the pitch and hear what types of things people needed in a product in order to buy it. Thankfully my co-founder and our initial development team could literally turn a light version of a feature around over a weekend. We were kind of like, “You need that?” Boom, we'd come out with it. But yeah, it was just a lot of emailing people, to be honest.

But there were a few brands at the time that I was really into because of the way that they were marketing. One was Revolve, which is still a customer of ours. They've crushed it for years in the influencer marketing space. At the time, they were really just doing the kind of “slam the gram” approach back in 2015. They did Revolve in the Hamptons and all that kind of stuff. Before they were a customer, I wrote a couple of blogs about them because I was so fascinated by what they were doing from a marketing perspective. But Raissa Gerona, who's the Chief Brand Officer at Revolve, I just kept sending her emails. One of them was about the Revolve Christmas party—it was a very Instagrammable Christmas party, and the same weekend, Minkoff opened their Rodeo Drive store and they made it an Instagrammable event. And we looked at the reach of those two events, and Revolve’s Christmas party crushed the Minkoff store opening. And so I wrote Raissa an email that Revolve beat the Minkoff opening, and she finally responded to me and that was like the 20th email I'd sent her. So Revolve was one of our first customers, and continues to be a great customer to this day.

But I think the one that I'm probably most proud of was Condé Nast. So Condé Nast was one of our first customers across all the major brands. This was within our first five customers. I had a contact who got us in front of the right people, we got in there, we showed them the product. They were like, “This is amazing,” but they were going through a procurement process. So we thought we weren't going to make it through, but the team there really liked us. I called a mentor of mine, and he was like, forget the procurement process. Just get in there, get people using your product, walk from desk to desk, make them love it, and you're going to win.

And so my colleague Mariana and I, we got a badge for the Condé offices in New York, and we went in there and we just forced them to pilot essentially, and manually onboarded everybody. And lo and behold, we didn't have to go through procurement—we won the deal.

And so those are a few examples, but I think TLDR: it's just hustle, man. It was just pulling out all the stuff, looking for those great customers who were forward-thinking and who got what we did, but then just hustling your way to get in front of them, and believing in your product.

We've always believed in building for the early adopters, because we want to be innovators in our market. And the tension for us has always been, as we've gotten bigger, customers demand more of the blocking and tackling stuff, like the day-to-day features, right? Like the kind of boring stuff, but it's the stuff that they need. But by putting your energy into that, you're not building for the innovators. So we've always said, it's our job to run this dual track of building stuff people need, but innovating at the same time—making sure that we're kind of putting our necks on the line to build things that we don't necessarily know are going to work, but that the most innovative customers are telling us are important to them. And we've always tried to balance those two things. So we're always looking for that next cohort of innovators that we can work with to build what everybody else is going to use in a couple of years.

You can watch the entire interview here, or listen to the full episode on Spotify, Apple Podcasts, or Google Podcasts. To catch up on our other 51 episodes, featuring leaders from brands like Milk Makeup, Gymshark, Gucci, and Summer Fridays, visit our Earned Podcast page.

Earned Ep. 26: Marianna Hewitt on Why Being an Influencer Was the “Greatest Preparation” for Launching Summer Fridays

In Episode 26 of Earned, we chat with the one and only Marianna Hewitt, powerhouse influencer, host of the Life with Marianna...